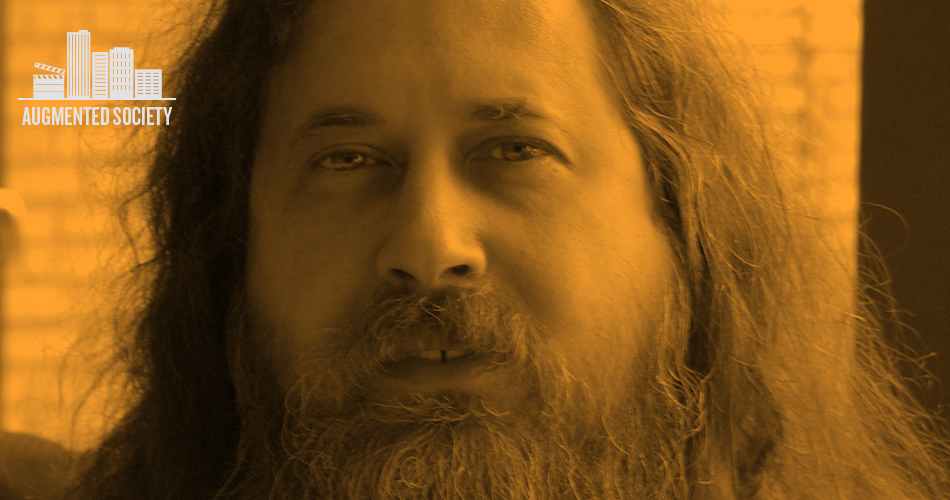 The main theme of this year’s edition of the Stockholm Film Festival is freedom. So, we tagged along, and asked a couple of people to write about freedom on film. We also called Richard M Stallman, the founding father of the free software movement. He talked to us about freedom, technology, surveillance – and the movie industry.

“My definition of freedom is having control of your own life, whereas having control of someone else’s life, or if someone else has control over your life, that’s power. There are people who don’t want to make a distinction between freedom and power , and who refer to both of them as “freedom”. They’ll say “Your freedom is bigger than mine because I can’t tell you what to do”. With that analysis, you’d have to end up concluding that a dictatorship has just as much freedom in it as a free country, it’s just that in the dictatorship the dictator has all the freedom. This is obviously absurd. That’s why we’ve got to distinguish between freedom and power.

What comes to my mind when I think about freedom and video is the TV series The Prisoner (Patrick McGoohan and George Markstein, 1967 – 1968). It shows someone whose freedom is under attack, and who fights unrelentingly to get it back. It also shows someone who is constantly surveilled.

How we can stop being surveilled? It’s not enough saying it’s unfortunate. We must organize constructively, and that means we need to reduce the level of general surveillance in our society. For instance, as a part of resisting unjust changes in society, I will not identify myself to watch, listen to or read anything. I buy my copies anonymously, or I get people to share copies with me. One or the other, but I will not purchase in any way that identifies me. I’ve got to be able to pay cash, and not give any personal information in any other way, because keeping track of what every person buys, watches or listens to is a threat to human rights. That database must not be allowed to exist.

I can’t see the future. I don’t know what the Snowden leaks will lead to. I however do see that it has already had an effect on a lot of people, and according to a recent study, around 50% of Americans see Snowden as a hero. I agree with them. I think that Snowden is a great hero. And you’ve probably noticed that in the e-mails I sent I put in a message addressed to any US Government agents that are reading my e-mails. I urge them to consider whether their oath of loyalty to the constitution calls for them to follow Snowden’s example.

Back then, just the fact that we couldn’t change programs and make them do what we wanted them to do was bad in its own right. Those nonfree programs weren’t usually malicious, but once some companies started designing malicious programs, and they were not slapped down by a wave of universal revulsion, others were tempted to follow the same path – and it got worse and worse, to the point where nowadays it’s the usual case that a nonfree program that’s widely used is malicious. It’s unjust because it’s not under the users’ control, and that unjust power tempted the owner into doing nasty things with the program to gain further advantage over those who fall into using it.

For instance there is spyware – many nonfree programs collect data about the user and send it somewhere. There are backdoors – and a backdoor means that the program receives commands from someone else to do things to the user, without asking permission of course, and often without informing the user about what it has done. If you use a mobile phone, you should know that mobile phones contain a backdoor. It’s a universal backdoor, and that means that it can be used to do absolutely anything that’s technically feasible to the software in that phone. Your mobile phone, if you made the mistake of having one, could be listening to you all the time. It’s Stalin’s dream. I can see that mobile phones are awfully conveniant. If I could have that conveniance without paying for it in freedom, I think I would have one. You know, if all I’d have to pay was some money, it’s probably worth it. But my freedom is important, and I’m not going to pay that.

This is the way the coffin really gets nailed shut on freedom: when many life activities require you to give up a freedom and most people won’t pass up those life activities, that’s when freedom is lost more or less permanently. I’m afraid we’re on that path in digital technology now. At the same time, in a broader sense, it looks like the plutocracy is implanting itself in governments around the world. That, together with the plutocrats’ control of the mainstream media gives them the power to drown out the truth; it’s their way of making democracy just a front.

When it comes to the Government’s role in the discussions – between the Motion Picture Association of America, various lobby groups and major internet providers – that led to the six strikes policy, this was an example where the US Government is on the side of business against the citizens, which is not unusual – you see that in many areas of life. That’s plutocracy for you. In the US we have plutocracy – using the forms of democracy, but the substance is plutocracy. This is extremely dangerous, and it applies to every area. When it applies to banking it can just put milions of people out of work and assure that most Americans will live in poverty. And when it applies to the copyright industry, well, they get nasty forms of power. The six strikes policy is one of them.

Since it is unconstitutional in the US to punish people on mere accusation, it would not be possible to make a law to do that. So Obama, who’s totally on their side, arranged this “voluntary” agreement that the internet service providers made with Hollywood and the music factories to punish their own customers arbitrarily.

That’s one of the things we need to get rid of. In some countries now, such as the UK, there is now punishment on mere accusation of sharing. They don’t need proof. Now, they couldn’t do that if the customers had rights, but this illustrates the fact that people in using the internet do not have the right to actually do anything. One can only do what some company is willing to let one do. It’s as if your house was in the offices of some company and you couldn’t get out in the street without that company’s permission.

This is something that we need to change. We need to give people the right to do various usual activities online. One way would be if you make a contract for the widely used kinds of internet service activities, then the company can’t terminate your service, except by going to court and proving a case. The same as if you rented a house and you have a contract that says til such and such a date you can use it, well, if you didn’t pay the rent the landlord could go to court and get you out. The point is that they shouldn’t be able to judge the case themselves. They shouldn’t be allowed to decide that you broke the rules and therefore terminate your service effectively, arbitrarily.

I don’t see a lot of movies. I only see them in airplanes. I regard the movie companies as the enemy of our freedom, because they’re constantly pressuring governments to impose unjust laws on us for their profit. So, I don’t like giving them money. And I don’t like the movies as something to do on a date because you’re not talking to each other when you’re watching a movie – and how much good is that?

Oh, and another thing, since most movies are crap, I think it’s a very bad practice to decide to go see a movie unless you’re deciding to see a particular movie that you have reason to believe is good. If you adopt that, you’ll stop supporting crap, and you won’t be wasting your own time or money – and you’ll stop supporting companies that will use that money in ways that attack our freedom.”